Sutton’s veteran athlete Darren Scott has set out his target for a hatrick of 200m world records next year.  Darren currently holds the world record for v40 and v45 in the 200m next year will see him target the v50 record. 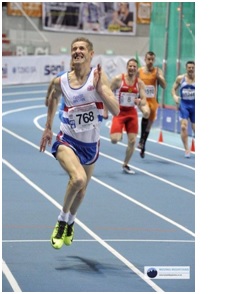 “I love running and I love competition.  I’ll soon be 50 but I am as hungry as ever to win medals and break records.  There’s something for everyone in Masters Athletics no matter how old you are.  People can take part as long as they are fit and able, and the Masters’ events show there is no age barrier in athletics. I’ve seen a 75-year-old pole vaulting and a 100-year-old competitor taking part at one championship!”

Michael Causer’s good form continued on Sunday at the North Of England Championships at Sports City, Manchester, where he won the Long Jump by jumping 7.29m. Michael is returning back to competing after a three year break due to injuries, and is hoping to get back to National level competition during the summer. Also competing at the Championships were Matt Crehan who ran the 5000m in 15.07.42 which smashed his PB by 38 seconds, and Darren Scott who ran the 100m in a seasons best of 11.44 and the 200m in 22.9 also a seasons best.

In a thrilling mens 4 x 100m relay Daniel Lamb, Jonathan Causer, Darren Scott and Michael Causer finished first in 45.00 and then Jonathan and Daniel ran the 4 x 400 relay along with Lochlainn Fisher and Peter Davies to finish in fourth place in 3.52.2. Thank you to Helena McGoldrick, Dave Morely, Pam Appleton, Diane Davies, Jane Makin, Phil Robinson, Peter Davies, Michael Causer, Lochlainn Fisher and Phil Thomas who all helped out with the events we had to official.

The senior team got their season off to a great start by winning the first Northern Athletics Senior League match at Cleckheaton, Yorkshire on Saturday. There were some great performances on an extremely cold and windy day. Michael Causer was welcomed back on to the team after three years battling injury and won the long jump and the 100m as did Daniel Lamb for the B team and they were both part of the winning 4 x 100 relay team. George Asson won the 200m and ran both the 4 x 100m and the 4 x 400m relays, Jonathan Causer ran in the 200m, 400m threw the discus and brought the 4 x 400m relay home for the win. Lochlainn Fisher won the 400m B race and ran the 4 x 400 relay. Matt Crehan, Steve Mayers and Jake Healy between them covered the 800m and 1500m and Matt came home first in the 5000m, Mike Hughes and Ian Conway both threw hammer and shot putt and Mike the discus, whilst Darren Scott and Phil Robinson covered as many events as they could, pole vault, 400m and 110m hurdles, High Jump, Triple jump and javelin.
Harriet Glover competed on the track for the first time in the 800m, and youngster Codi Wills competed as a senior for the first time and ran very well in the 100m and 200m. Lauren Marshall competed in the long jump and then 100m, Jess Leonard ran the 200m, 400m and threw the shot putt, Gemma Connolly had a fantastic win in the 3000m, Rachael Fairclough also ran the 3000m and then the 1500m, Maddie Williams had a great day running 800m, 1500m and threw the discus and javelin for the first time. Hannah Seabrook jumped in both high jump and triple jump and Julia Hayes covered all four throwing events.

The first match of the upper YDL league was held a Leigh Sports Village on a very windy day. Fourteen St Helens athletes and two Warrington athletes competed with a great team spirit with many of them covering events they do not normally compete in.
There were only two U17 men, Michael Farr and Daniel Dobson. Michael ran the 100m in 11.9 pb and the 200m in 23.4 pb. Daniel competed in the long jump and also got a pb with 5.04m despite him being unwell. Members of St Helens Sutton A.C. took part in most age groups of the National Cross-country Championships held in muddy conditions in Nottingham’s Wollaton Park. The club’s youngest runner was Michael Dobson who ran in the Under13years. Boys race over 3km. finishing in 315th position in a field of 458 finishers with a time of 15 min.03 secs.. Michael Brussels ran in U15yrs. Boys 4.5km. race recording 18 min.45 secs. finishing 313th of 379 finishers. Running in the U17yrs. Ladies race was Rachel McGoldrick over 5km. to finish in 93rd place with 163 finishers behind her and a time 28 min.06 secs.. Lucy Thompson was a competitor in the U20yrs. Ladies 6km. race recording a time of 28 min.03 secs. and a place of 92nd amongst the 148 finishers. The club had three competitors in the Senior Men’s race over the day’s longest distance of 12km.. Matthew Crehan’s time was 42 min.25 secs. for 229 th placing. Andy O’Connor(M55) 62 min.49 secs.and 1460th place and Ray Vose(M50) 68 min.34 secs, 1629 th place. This race had the enormous field of 1,762 finishers.
Only two of St Helens Sutton A.C. members were racing at the weekend. Matthew Crehan competing in the Standish Hall trail race and Louise Hogg running in the Wrexham Village Bakery Half-marathon. Matthew followed up last week’s win with another victory. The race’s 10km. of “trails” consisted of fields, bridleways, and wood & farm tracks, and all were well and truly conquered by Matt as he came out the winner in a time of 35 min.29 secs.over a minute clear of the chasing field. The organisers of Louise’s half-marathon apologised for the course, which started and finished on the Wrexham Industrial estate, being a little over distance. Louise, an L40 veteran finished 20th in her classification with a time of 1hr.44min.48secs.with approximately 800 finishers behind her.

The club’s oldest regularly competing member, Dorothy Fairhurst (F70), ran in the Nick Beer 10km road race, Starts on the promenade in Llandudno and follows Marine Drive around the scenic Great Orme, before returning to the promenade and finishing opposite Venue Cymru. Dorothy was the first finisher in her age group with a time of 55 min.15 secs.