Saturday 14th October saw ten St Helens Sutton AC athletes compete in the first cross country of the 2017/18 season, held at Heston Park Manchester.
Three athletes competed in their first ever cross country for the club, including Jessica Bairstow, Rhys Hopkins and Michael Duffy.
For the under 13 boys, Rhys was first home, finishing in 13:27, in 22nd place, shortly followed by Michael Dobson who completed the 3.28km course in 13:46 in 30th. Also in this race were the under 13 girls; Hollie Brussels ran 15:29 to finish in 37th place and Jessica Bairstow finished in 20:34 in 82nd place.
Charlie Roberts led the under 15 boys team home, he finished in 19:57 in 16th position. Michael Brussels ran 21:42 and finished in 34th whilst Michael Duffy finished the 4.97km race in 26:12 in 41st.
Coming back from injury; Gemma Connolly finished 3rd in the senior ladies 8.49km cross country. Gemma finished in 34:51.
Representing the senior men in the 9.84km race, Ian Roberts finished 249th in a time of 47:36 whereas Ian White finished in 296th place in 49:45. 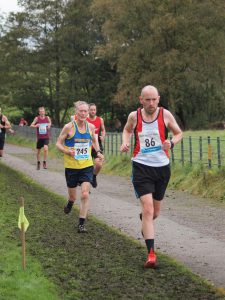 Entry fee is £8 per person and should be given to Helena McGoldrick or Chris Dempsey by Thursday 7th September at the latest.

The Cross Country season will soon be upon us with fixtures starting in October.

Please pay your entry fee as soon as possible to Helena McGoldrick or Chris Dempsey, £5 for all five races or £4 for Under 11’s for four races.

These races are for Seniors only and entry is made per event – see Matt Crehan or Ray Vose.

Saturday 19th and Sunday 20th August saw the Northern Track & Field Championships, held at Leigh. There were 3 athletes representing the club, all of which achieved personal bests.

On Saturday, under 13 boy, Michael Dobson went in the 800m and finished in a time of 2.21. Michael was 6th overall and achieved a Grade 1 standard!

Charlie Roberts competed in the under 15 boys 800m on the Sunday and took the bronze medal. He finished in 2.03 which is also a Grade 1!

Also representing the under 15 boys, Michael Brussels competed in his first ever 3000m. He finished in 10th place overall, with a time of 11.18.7- we look forward to seeing Michael gain experience in this event!

A big well done to the boys who competed in the Northern Champs! 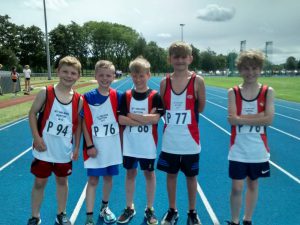 Sunday 2nd July 2017 saw the second Cheshire League match of the season, held at Crewe where the conditions were idyllic. St Helens Sutton AC had a fair turnout, including 19 juniors and 1 senior.  On the whole, 33 pb’s and 2 seasons bests were achieved!

There were several outstanding performances from the athletes, of which Jessica Bainston, Rachael Cahill, Gabriel Mullen, Liam Johnson and Saul Hockenhull, all competed in their first track events for the club, setting an excellent baseline to go on to beat, in competitions to come.

Representing the under 11 boys, Gabriel Mullen, Liam Johnson and Saul Hockenhull all competed in the 150m, 600m, long jump and javelin. They all performed exceptionally well and are off to a good start!

Well done to all athletes who took part and a big thank you to those who volunteered to help, including Chris Dempsey, Helen Virton, Lisa Taylor, Ben Taylor, Katie Duffy and Jake Healey (in between his race).

The next Cheshire League match is to be held at Warrington on Sunday 30th July- home advantage.

Hope to see you all there (ATHLETES and OFFICIALS)!

Sunday 18th June 2017 marked Father’s Day and despite this, 24 athletes still turned out for St Helens Sutton AC. The third YDL lower meeting was held at Connah’s Quay; the conditions for the competitors were extremely hot but ideal for those who were spectating.

There were 17 personal bests achieved on the day and 2 athletes who competed in their first track meeting. Well done to Cara Hughes and Adam Loughran!

All 4 boys ran in the relay to finish 3rd.

Well done to all competitors!

Thanks to Dave Morley, Barry Greenall, Louise Greenall, Tony Harrison, Ian Roberts and Daniel Dobson for officiating for the cub!

Michael Causer’s good form continued on Sunday at the North Of England Championships at Sports City, Manchester, where he won the Long Jump by jumping 7.29m. Michael is returning back to competing after a three year break due to injuries, and is hoping to get back to National level competition during the summer. Also competing at the Championships were Matt Crehan who ran the 5000m in 15.07.42 which smashed his PB by 38 seconds, and Darren Scott who ran the 100m in a seasons best of 11.44 and the 200m in 22.9 also a seasons best.