Saturday 19th and Sunday 20th August saw the Northern Track & Field Championships, held at Leigh. There were 3 athletes representing the club, all of which achieved personal bests.

On Saturday, under 13 boy, Michael Dobson went in the 800m and finished in a time of 2.21. Michael was 6th overall and achieved a Grade 1 standard!

Charlie Roberts competed in the under 15 boys 800m on the Sunday and took the bronze medal. He finished in 2.03 which is also a Grade 1!

Also representing the under 15 boys, Michael Brussels competed in his first ever 3000m. He finished in 10th place overall, with a time of 11.18.7- we look forward to seeing Michael gain experience in this event!

A big well done to the boys who competed in the Northern Champs!

Sunday 2nd July 2017 saw the second Cheshire League match of the season, held at Crewe where the conditions were idyllic. St Helens Sutton AC had a fair turnout, including 19 juniors and 1 senior.  On the whole, 33 pb’s and 2 seasons bests were achieved!

There were several outstanding performances from the athletes, of which Jessica Bainston, Rachael Cahill, Gabriel Mullen, Liam Johnson and Saul Hockenhull, all competed in their first track events for the club, setting an excellent baseline to go on to beat, in competitions to come.

Representing the under 11 boys, Gabriel Mullen, Liam Johnson and Saul Hockenhull all competed in the 150m, 600m, long jump and javelin. They all performed exceptionally well and are off to a good start!

Well done to all athletes who took part and a big thank you to those who volunteered to help, including Chris Dempsey, Helen Virton, Lisa Taylor, Ben Taylor, Katie Duffy and Jake Healey (in between his race).

The next Cheshire League match is to be held at Warrington on Sunday 30th July- home advantage.

Hope to see you all there (ATHLETES and OFFICIALS)!

Sunday 18th June 2017 marked Father’s Day and despite this, 24 athletes still turned out for St Helens Sutton AC. The third YDL lower meeting was held at Connah’s Quay; the conditions for the competitors were extremely hot but ideal for those who were spectating.

There were 17 personal bests achieved on the day and 2 athletes who competed in their first track meeting. Well done to Cara Hughes and Adam Loughran!

All 4 boys ran in the relay to finish 3rd.

Well done to all competitors!

Thanks to Dave Morley, Barry Greenall, Louise Greenall, Tony Harrison, Ian Roberts and Daniel Dobson for officiating for the cub!

For the second YDL (lower), 25 athletes travelled to Sportcity, Manchester. On the day, 28 pb’s were achieved, despite the conditions being miserable and dreary.

15 young athletes from St Helens Sutton AC travelled to Ashton-Under-Lyne on Sunday 7th May for the first Cheshire League of the track season. There were 17 pb’s achieved on the day.

The Under 15 girls relay finished 6th overall, this consisted of Lauren, Lizzie, Jessica and Rachel.

Thanks to Chris Dempsey, Tony and Gill Harrison and Jake Healey for officiating.

Saturday 22nd April saw the first Youth Development League for the Under 13’s and Under 15’s. The match was held at Victoria Park, Warrington and the conditions were ideal for racing.

For the Under 15 Boys; Michael Brussels, James Moran, James Morris, Luca Noonan and Charlie Roberts all competed. Charlie went on to achieve 3 pb’s in his events: 2:12:5 for the 800m, 40:0 for the 300m and 1.57m in the high jump! As well as this, Joseph Byrne, Michael Duffy and Andrew Redhead competed in their first track races for the club. 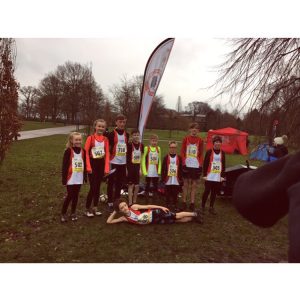 First off for the club were the under 13 boys and girls. This race saw Michael Dobson finish 28th overall in 12.57, followed by Max Young who completed the 3.1km race in 51st place in 16.51. Twin brother Charlie Young, brought the team home in 52nd place in 17.28 meaning the team finished 13th overall! Lucy Bridge went in this race too; she finished 22nd in 15.39.

The club had 2 representatives in the senior ladies 8.4km. Gemma Connolly won the race, finishing in 33.25!! Meanwhile, Rachel McGoldrick finished 37th in 39.29.

Well done to everyone who competed this season, hope to see you all next year!

The Northern Cross Country  Championship was held at Knowsley Safari Park on Saturday 28th January. The conditions were typically cold and wet.

Representing the club in the under 13 boys 3km, Joseph Byrne completed the race in 65th in 12.36 and unfortunately on this occasion, Michael Dobson was unable to finish the race however he illustrated true guts and determination.

Gemma Connolly placed her highest position to date in the northern cross country championships! She covered the distance of 8km in a time of 33.03 finishing in 17th place! Also in the senior ladies race, Rachel Beesley finished 151st in 41.06 and Louise Hogg 222nd in 44.58.

Well done to all those who raced in these championships!