For the first club event of 2017; Saturday 14th January  saw the fourth Manchester Area Cross Country of the season. The club had 13 representatives whom travelled to Kenworthy Woods, Wythenshawe, of which one raced for their first time!

Michael Dobson was first home for the club’s under 13 boys. He completed the 3.5km course in 11.43 in 18th place. He was followed by Joe Byrne who finished in 11.50 in 19th place. Finishing in 49th place, Max Young ran 15.48 whereas Charlie Young finished in 50th place in 16.02. These performances meant the team finished 9th overall.

Also in this race; Hollie Brussels led the under 13 girl’s team home, finishing 46th in 13.51. Lucy Bridge was next in- she finished in 14.07 in 53rd place and Maddie Forshaw ran in her first cross country and completed the race in 15.50 in 64th place. Overall the girls team was 15th.

Well done to all who competed!

Many thanks to Chris Dempsey who acted as an official for the club!

Saturday 12th November saw the second Manchester Area Cross Country League, which was held at Boggart Hole Clough. There were 17 athletes competing for the club of which under 11 girl, Chloe Leigh ran for her first time and she finished the 2km course in 71st place in 12:31. Well done!
For the under 13’s, Michael Dobson finished the 3km race in 13:13, followed by Charlie Young in 52nd place in 17:20 and Max Young finished 54th in 17:32. The boys finished 11th as a team! Lucy Bridge was in the same race as the boys and she finished 45th in 16:03.

Well done to everyone who ran!

See you at the next match, which is at Heaton Park on Saturday 3rd December! 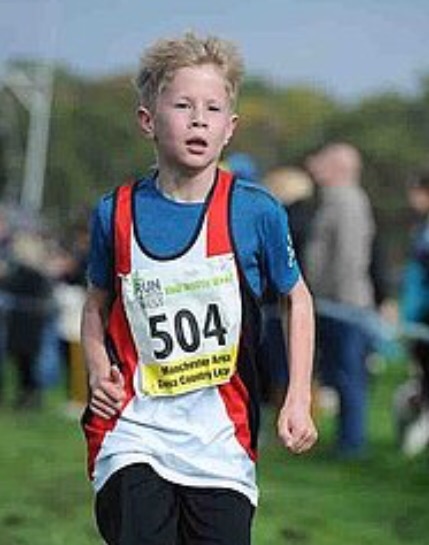 Well done to everyone who competed!

Hope to see more athletes from the club next time!

Twenty three athletes travelled to Colwyn Bay in order to compete in the Youth Development League (lower) on Saturday 16th July. Team spirits were high as most athletes travelled on the coach! As a result of many outstanding performances, the club achieved promotion and the athletes came away with twenty eight personal bests!

A massive thank you to everyone who competed in the league this season and many thanks to all of the officials and volunteers (parents included).

Hope to see you all competing next year after such a successful track season this year!

Sunday 10th July saw the third Cheshire league of the season; held at Connah’s Quay, Deeside. There were 7 athletes competing for the club resulting in 10 personal bests and 1 seasons best.

Representing the under 15 boys for the first time, Toby Ferguson competed in the 200m and finished in 31.5 which is a fantastic benchmark for future pb’s.

Well done to everyone who competed for the club! Thanks to Chris Causer, Dianne Davies, Louise Greenall and Louise Hill for officiating.

The boy’s 4x100m relay team consisted of Charlie, Michael, Max Y and Max H and they clocked a time of 68.9.

The 4x300m relay team was: Charlie, Nathan, Michael B and Michael F- the boys finished in 3.04.5. However at the previous YDL meeting; the same team got the club record with 3.02!!

A big thank you to all of the officials and volunteers!

Well done to everyone who competed, hope to see you all at the next meeting on Saturday 16th July at Colwyn Bay. The club needs as many athletes to turn out in order to maintain 2nd position (if not to win the league!)

For the under 11 boys, Jacob Roberts competed in the long jump achieving 3.48m; he also ran in the 75m finishing in 11.9 (pb) and threw the soft javelin 8.57m which was another pb!

Well done to everyone who competed! Hope to see you all at the next meeting: Sunday 19th June at Warrington (home advantage).