Saturday 10th March saw the UK Inter Counties, held at Loughborough. Charlie Roberts and Joseph Byrne were selected to represent Merseyside for the first time. The boys made up the under 15 boys team with Charlie finishing 276th in 22.37 and Joseph in 284th in 23.05. Matt Crehan was selected to compete in the senior men’s cross country and finished in the top 100!

Despite it being Mothering Sunday, 6 athletes travelled to East Cheshire to compete in an open cross country, two of which competed for the club for their first time. 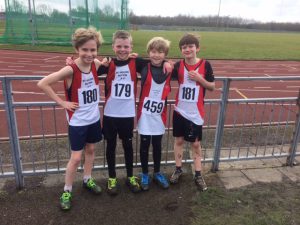 Poppy Ward and Luke Wilson ran in their first under 9 races. Poppy finished 31st in the girls race and Luke finished 27th in the boys.

For the under 11 girls, Daisy Ward finished 21st. The club had a team in the under 11 boys; this consisted of Gabriel Mullen, Will Vose and Liam Johnson. Gabriel led the boys home in 6th place, followed by Will in 17th and Liam in 25th, meaning the team finished 5th overall!