Lorraine Kelly Swan (F40) ran in the Natterjack Seaside 10km. road race which starts in Southport’s Princes Park, finishing 722nd in a large field with a time of 63 min.53 secs.

Ian Conway, competing in the last Wrexham Throws competition of the season putt the shot 8.44m. and threw the hammer 21.24m., both pleasing performances.

St Helens Sutton A.C. had teams in Sunday’s Northern Road Relays which started at, and then circled, the Etihad stadium in Manchester. The club had 13 representatives, including the Under13yrs. Boys. On their first leg, Michael Dobson finished in 27th. place running the 3.3km. course in a time of in 11 min.05 secs, then Charlie Young finished 33 rd. in 13 min.56 secs.. On the third and final leg, Max Young ran 13 min.48 secs. for the team to finish in 28th. place For the “B team” Harley Chadwick finished 33rd in 11 min50 secs.. .

Three senior ladies represented the club at Wigan 10K, all having a great race recording personal bests. First home was Rach Beesley in 43:47, 13th female, 7th in her age category and 207th overall. Next was Amy Corfield in 48:13, 32nd in her age category. Karen Harrison was delighted to beat her PB by 2 seconds, finishing in 56:42, 23rd in her age category. Well done ladies and congratulations on your PBs!

Sadly we report the death of Roger McCall who died on 21st August 2016. He was taken ill and admitted to hospital recently with a suspected stroke but it was in fact a serious problem related to the cancer that he had. He did come home from hospital and was cared for by his wife, Rosemary.

Roger was heavily involved in NW athletics for many years, he was an ever present at competitions throughout the north and his friendly smile was familiar to many. Roger had been a member of  St Helens Sutton for over 40 years and although it was 20 mile drive to club training that didn’t stop him being a regular at training nights and acting a mentor to up and coming coaches and officials.

He also advised the local leagues on optimising their competitions to make them more efficient and enjoyable. Roger contributed so much to athletics and anyone who  had the pleasure of working along side him would agree.

Roger (left), recieving his award as England Athletics official of the year 2015.

The Lakeland 100 “Ultra Tour of the Lake District” is a circular tour of the lakeland fells, covering a distance of 105 miles with 22,500ft of ascent, details here:- http:// 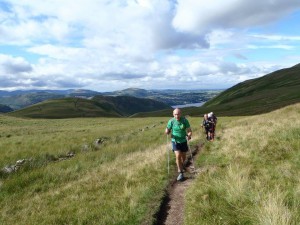 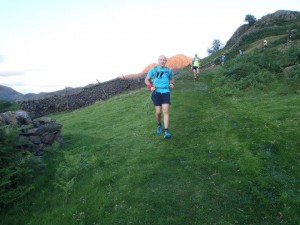 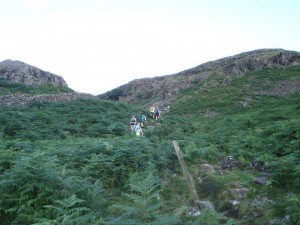 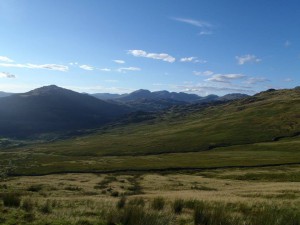 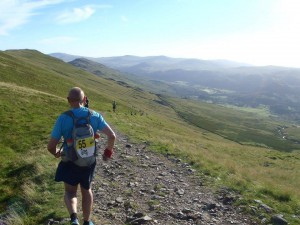 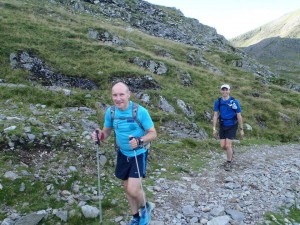 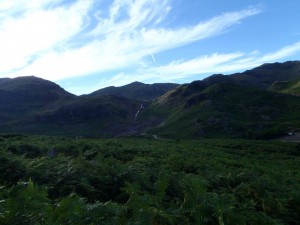 www.lakeland100.com/the-lakeland-100
I entered this race with plans of lots of training, route reccies and a sub 30 hour finish. Injury put paid to that and I decided to leave it till 2017. Only I forgot to cancel my entry and faced with losing the £100 entry fee I decided about 5 weeks before that I’d give it a go on minimal training and no visits to the lakes. The week before I injured my knee, which Ray Vose kindly diagnosed as “fat pad impingement” – running hard downhill was painful so it meant I’d have to take it very easy on the descents.
I arrived at Coniston stressed up after delays on the motorway, wondering if I would get there in time for registration closing at 4pm, not helped by satnav trying to take me on the Hawkshead car ferry. I genuinely thought about turning back for home crawling through the crowds in Bowness.
The race started at 6pm Friday night after a rendition of “Nessun Dorma” from a Wesh tenor – inspiring stuff. Nessun Dorma translates as “None shall sleep”, a reference to the fact that most competitors start Friday night and finish on Sunday morning. Hallucinations are common on the second night and I later found out that it had become the race theme song after one competitor in the 2012 race had hallucinated that he’d run past Paul Potts humming Nessun Dorma. Only Paul Potts tweeted the race organiser later that day to say that it was actually him – he was on holiday in the lakes!
Running off at the start was quite special with cheering crowds. That became a common them throughout the race with almost everyone you passed (seemingly knowing what you were doing) offering support and encouragement.
It was a relief to get the first long descent over to Seathwaite without pain as I had dreaded the walk of shame back down to the start at Coniston if the knee had gone early on. By Eskdale it was dark and the sight of a procession of light from headtorches into the distance was an impressive sight.
One feature of the race is the 14 checkpoints, each with a theme and manned by enthusiastic helpers who really look after you. Checkpoint 3 at Wasdale Head was probably my favourite, described as ” a barn in bleakest Wasdale with glitter balls, 80’s disco music, excessively flared trousers and affront hairstyles” – just what you need to lift your spirits before a long climb up the Blacksail Pass. Checkpoints at Buttmere and Braithwaite followed with dawn starting to break.
On to Blencathra and the first low. 41 miles and 13.5 hrs done, 64 miles and 25 hours still to go. Psychologically the times seem long when your previous longest race took just 12 hours. The mood got darker at the Dalemain estate, the start of the Lakeland 50 event. I had painful feet caused by wet socks, which I should’ve changed much earlier and the thought of 46 miles to go with 59 miles done wasn’t helping much. Neither was thinking that at 19 hours in I was only half way time-wise.
7 miles later at Howtown I reached the biggest low and doubted I would finish, not helped by someone cheeringly telling me that “the next section is the hardest”. Funny how little things can lift the spirits and American Idiot by Green Day playing at the checkpoint gave me a lift as I headed off for the big climb up Fusedale. Suprisingly I actually enjoyed this section and the views over Haweswater, though I’d have enjoyed it a lot more if my feet hadn’t been burning on the stony track. I decided to leave inspecting them until I got to Mardale Head, when I found two large blisters caused by not tightening my shoes enough. With blister plasters applied I left the checkpoint for the next climb. Mentally I felt much better. Still 30 miles to go, but all broken down into manageable chunks I felt confident of completing the race. Physically my feet were still burning but the pain was manageable. Darkness arrived just before Kentmere. On to Ambleside and then Langdale. I’d been really worried about the second night but surprisingly I felt fine while the group I was with were falling asleep and hallucinating. 4:20am at the Chapel Stile checkpoint at 95 miles I met Mark Liptrot who’d been helping out at the event. He’s said before the start that he expected to see me there so it was good to arrive there feeling much better than I expected. Just 10 miles to go and with dawn breaking, off towards Tilberthwaite and the final climb. The final checkpoint is themed “Stairway to Heaven”, the race notes saying that from here “The only is up”. Final ascent done and down into Coniston with lots of people cheering on the final run to the finish. It was a bit different to start a race at 6pm Friday night and cross the finish line at 8:42 Sunday morning, the race had taken 38 hours 42 minutes.  Into the hall to cheers and medal presentation, the organisers did make you feel quite special – I have to admit to feeling quite emotional!

I had previously unfairly referred to the L100 as an “executive trail race”, but I am now converted. It’s a fantastic, really well organised event and is actually good value for what you get. It did feel really special to be a part of. Would I do it again? I’m getting my entry in tomorrow but next year I’ll be targeting 30 hours and I’ll be doing some proper training, honest!